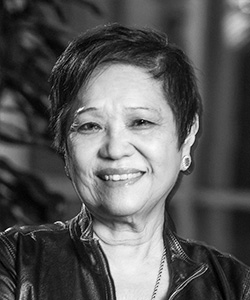 I was 40 years old and flipping through a magazine when I first read about this new career of financial planning. The industry was in its infancy and many people thought the concept was bogus; but I was intrigued. In a prior career, I’d worked in the “think-tank” world in California, completing long-range planning for the Stanford Research Institute and then doing allocation models for United Airlines. I had a lot of corporate planning skills I could apply to individuals. I was a “late bloomer” because I found financial planning at midlife, but it was perfect for me because I liked solving problems, making a difference for people, and I wanted meaningful work.

I’d grown up as a first generation Chinese immigrant in Mississippi; and as a female minority, I had gotten used to being different. If you’re Chinese, you’re going to talk about money; regardless if you’re a man, woman, or dog. Money is just part of our culture. I remember my mother would ask anyone and everyone how much money they made. I’d tell her, “You don’t ask questions like that!” But, she was the consummate Asian mom and didn’t mind asking anything. I eventually got comfortable asking my clients all those personal financial questions too!

I’ve been called a trailblazer and I have always advocated for women in the industry. In 1992, I helped start the Raymond James Women’s Advisory Board; an internal organization focused on fostering opportunities for women. I’ve also been featured in national publications; including Money, Fortune, The Wall Street Journal, Financial Advisormagazine. For nearly four decades, I’ve led the Starner Group of Raymond James & Associates, an invitation-only wealth management practice with more than $1 billion in assets under management.

From the start of my financial planning practice, I’ve always wanted to give women a voice in financial decision-making. I decided early on that if I worked with a couple, the woman would be heard. I’m an advocate for each of my clients. Financial Planning is not just a paycheck or what you save.  Financial Planning is about achieving dreams and wishes. I help people figure out why they are making money and why they are working so hard.  After all, you don’t want to have “I died with six million dollars” on your tombstone.

As a Vice President and a Founder of the Women’s Leadership Alliance, I am focused on sharing my own experience with other women interested in this field. I’m living proof that you don’t have to start in financial advising right out of college.  You can have multiple chapters to your career; and you can even put your career on pause for a while to be a stay-at-home mom like I did. Becoming an advisor at 40 worked out pretty well for me!  Financial planning gives me job satisfaction, financial security, and the chance to affect change in other people’s lives.  I just don’t want to keep that a secret.